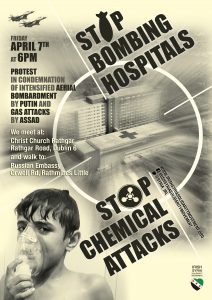 Idlib city and province in north-west Syria have been almost wholly under the control of rebel groups, now including al-Nusra, for almost the entire duration of the war in Syria. While the regime and its allies have been pursuing a campaign of surrender-or-starve sieges in other parts of Syria, the inevitable regime-enforced “Reconciliation” deals entail displacing the recalcitrant families from their homes and sending them to Idlib. As Assad – with Russian and Iranian support – has been gaining the upper hand in Syria, this pattern has been repeated time and time again – most famously in Aleppo in December 2016.

Now, in the region of Ma’arrat al-Numan in southern Idlib, the Russian and Syrian airforces have teamed up to deliver ever more cruel and heinous ways of attacking their enemies: The aerial bombardment and destruction of hospital facilities by Putin followed a day later with gas attacks by Assad. In Monday’s gas attack at least 58 people including children were killed. They died fainting, vomiting, foaming at the mouth and choking. There were no proper medical facilities available to treat them.

Once more, the powers that be in the international community are proving unwilling to stop these atrocities. Emboldened by Western indifference and now even the tacit support of the Trump administration, the vile Assad regime will try to press on with this brutal strategy and the atrocities will intensify until all opposition has been annihilated.

The beleaguered people of Syria desperately need to know that their plight is not being ignored. As the last hope that these people have, we have to make our opposition clear and deliver a strong message to Putin that we will not stand idly by and let this slaughter continue.

Please join us in a demonstration which will start in Rathgar Village and will proceed by foot to the Russian Embassy on Orwell Road. We will meet on Friday 7th April at 6pm at the car park to the side of the large Presbyterian Church (Christ Church) and walk to the Russian Embassy to bring our outrage to their door.