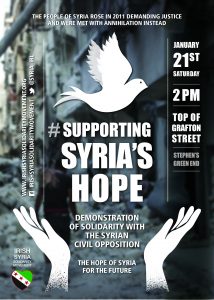 Saturday 21st January 2pm Top of Grafton Street (Stephen’s Green end)
The people of Syria rose in 2011 demanding justice and were met with annihilation instead.
In spite of horrific repression, the rise of extremist factions and the interference of numerous external international forces, the local pro democratic revolt in Syria has continued. It has been the focus of Assad’s savage repression, and although it is faltering after over five years of relentless attack by Assad and his allies Russia, Iran Hezbollah and others, it continues. There are areas of Syria which have experienced democracy and the development of free democratic institutions – including local councils, free press and radio, women’s groups – for the past five years. Now squeezed between the genocide and ethnic cleansing of Assad and the extremist ISIS and Al Qaeda affiliated groups, the civil opposition needs our outspoken support. They are the hope of Syria for the future.
In truth there has been no ceasefire, the slaughter, the barrel bombing, the starvation – the massacre – continues. Those who were forced to leave Aleppo are being bombed again. Children are still ‘being pulled from the clay’ of Syria as a result of Assad’s barrel bombs. Wadi Barada, Douma, Idlib, Ma’arat Al Nouman and many other ares are being shelled, bombed and besieged, deprived of food, medicines and fuel.
Join us and show solidarity with the people of Syria who want freedom with justice, but who are being subjected to bombing, starvation, imprisonment, torture and ethnic cleansing instead.
#SupportingSyriasHope