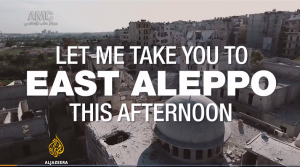 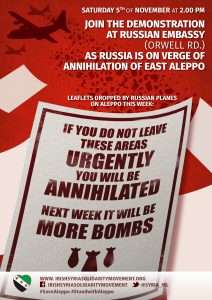 We have composed a letter which you may like to use to contact your Public Representatives on the ongoing crisis in Syria. Our public representatives, on the whole, have been found lacking on their response to the crisis in Syria. By writing to them directly, you might encourage them to fulfill their mandate to represent the voice of the Irish people on this important matter.

You will find an alphabetical list of all T.D.s here: http://www.oireachtas.ie/members-hist/default.asp?housetype=0&HouseNum=32&disp=mem

Your will find an alphabetical list of all Senators here: http://www.oireachtas.ie/members-hist/default.asp?housetype=1&HouseNum=25&disp=mem

Eastern Aleppo faces extermination due to incessant airstrikes carried out by the Assad regime and its Russian allies. Barrel bombs, incendiary cluster munitions and ‘bunker-busting’ high explosives are being dropped on its civilian population of approximately 300,000, including 100,000 children. Hospitals are a prime target. Now, only 30 doctors remain in Eastern Aleppo to treat the victims of these horrific attacks.
We cannot stand by while the children of Aleppo are being killed and gravely injured. We must speak out against Vladimir Putin and his Russian forces for their direct role in perpetrating these atrocities.
On Thursday, 20th October, Dundalk FC face Putin’s local team – Zenit St. Petersburg – in the Europa League
The Irish Syria Solidarity Movement (ISSM) is holding a demonstration before this significant football match. Please join us outside Tallaght Stadium, from 6pm on Thursday, to protest against Russia’s military involvement in the war in Syria.
Show your solidarity with the people of Aleppo, and elsewhere in Syria, who are under Russian bombardment.
Leading NGOs on the current situation in Aleppo:
Médecins Sans Frontières, Head of Operations: ’The whole of eastern Aleppo is being targeted. Hundreds of civilians are being massacred; their lives have turned into hell.’
Amnesty International: ‘Deliberate attacks on civilians not directly participating in hostilities and on civilian objects, including hospitals and other medical facilities, violate international humanitarian law (also known as the laws of war) and amount to war crimes’

Irish Syria Solidarity Movement General 11th October 201617th October 2016 0 Comment
Please see below emails that were sent to the Russian and Iranian embassies and copied to info@irishsyriasolidaritymovement.org in response to the barbaric attacks on civilians in Aleppo.

To support this effort, please phone (01 492 2048) and email (russianembassydublin@mid.ru) the Russian embassy to express your disgust in person.
We also urge you to contact the Iranian embassy in the same regard (01 288 5881) & iranembassy@indigo.ie.
Please email and phone as frequently as you feel necessary.

Dear Russian Embassy,
I write to express my disgust and outrage at what your Country is doing in
Syria and in particular in Aleppo at the moment.
I am numb from reading articles and viewing footage watching innocent
civilians being made suffer because of your government’s greed and lust for
power.
Your government is responsible for turning Aleppo into hell on earth. Your
government is engaging in WAR CRIMES.
I ask that your government stop bombing and using gases on these innocent
people. I ask that your government talk to America and find a way forward
that is not destructive of innocent life.
PLEASE STOP THE BLOODSHED.
Lisa O’ Reilly

I am writing to you to express my utter disgust at the outrageous, indiscriminate mass murder of the civilian population in Syria and particularly in the city of Aleppo, that Russian government is carrying out.
I want you to know that the righteous citizens of this World are not going to stand by and watch the Russian barbarity idly. We will stand against it  in any way we can – no act too small, no voice too insignificant.
The medieval primitives and thugs that you call your leaders are cowardly bombing hospitals, schools and households across Syria, killing innocent children, women and men.
Please read that last part once again and reflect on it for a while.
Concerned Outraged Citizen,

Dear Ambassador
As a concerned Irish citizen, I wish to protest at the continuing Syrian and Russian bombing of the city of Aleppo which, according to newspaper reports, has in recent weeks led to the deaths of around 320 civilians, including 100 children. Does this obliteration of an ancient civilised city and the mass murder of its citizens (including its innocent children) not strike a chord of humanity in the hearts of ordinary Russian people? Do they not also wish their government to use its huge influence with the Syrian government to end this horror today? Please pass this message – DECLARE A CEASEFIRE SO THAT INNOCENT CIVILIANS CAN BE SAVED AND RESTART TALKS AIMED AT ENDING THE WAR – to President Putin.
Yours sincerely
Andy Pollak
Dear Ambassador Peshkov,
Why is it that your country believes that innocent Syrians deserve to die? Why is it that your country kills innocent Syrian civilians on a regular basis and has done so since September 2015? Why is it that Russia props up and supports a murderous, defunct, illegitimate Assad regime in Syria? Why is it that the Russia air-force uses such abhorrent tactics in Syria as cluster bombing and double tap strikes to inflict maximum fatalities and carnage? Why does Russia play with Syrian lives as part of your country’s global geopolitical game of chess?  Finally, why did this Syrian child deserve to die like this?:
I eagerly await Russian answers, but if you don’t mind I would like to make some suggestions to Russia; stop its involvement in the Syrian war immediately, withdraw all Russian war personnel and weaponry immediately, play its part in bringing lasting peace to the country, and reflect upon its abhorrent murderous actions.
Yours sincerely,
Kieran Cunningham – A saddened and angry Irish citizen
Vladimir Putin is guilty of war crimes against civilians living in Syria,. He may believe he has a legal right to be present there but he has no right to kill innocent people.
I sincerely hope he is brought to a court of Justice to answer for this evil he commits.
Marie Cronin.
8/10/16
Mr Putin and government, I beg you to stop your campaign of destruction in Syria.  All human beings have a right to live in peace in their own homes, to bring up their children without fear and deprivation, to have enough to eat and drink and to sleep safely at night. Stop and consider your actions.  Whatever your motives, not one person in Syria or anywhere else deserves to suffer or die because of them.  Talk to other leaders, find a way of peace that does not involve this mindless destruction, deprivation and killing.  You are human beings too, try to find it in your heart to treat your fellow humans as you would want to be treated.
Stop now ! Do something positive and constructive instead. Please don’t ignore my message.
Gina Hingerty
To the Russian Ambassador to Ireland Mr. Peshkov
(in copy President Michael D. Higgins & Minister for Foreign Affairs and Trade Charles Flanagan)
as an Irishman, I find it highly offensive to have an embassy of the Russian Federation in this country. Russia’s ongoing cowardly slaughter of civilians in Aleppo and elsewhere in Syria is deplorable and a stain on all humanity.
Russia’s abuse of international diplomacy to further it’s own selfish ends is a disgrace and you, as a diplomat, are in integral part of those perverse and cynical machinations. When you presented your credentials to our President, did you not give him certain undertakings? Are you living up to those undertakings now as you massacre Syrian children in their beds?
It is Ireland’s shame not to have expelled you before now. Allowing you to have a presence here facilitates the pretence that you are capable of behaving like a civilised nation when in reality you behave as medieval thugs.
I hope our country soon finds the courage and sense to expel you.
Yours sincerely,
Michael Lenehan

just shows how lacking in any moral sense it’s government is.

Do you think we are such fools as to believe a word that emanates from Russian sources.

Not since Hitler has a state and it’s leader used terror on such a scale against a civil population.

Your people suffered Stalingrad and know that barbarism doesn’t win in the long term.

For you, it seems, your job is to continue lying on behalf of your State.

I feel sorry for you. 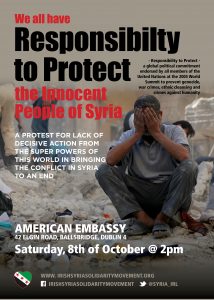 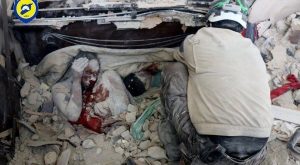 The Irish Syria Solidarity Movement with the support of peace campaigner Brendan Butler will be holding a protest demonstration outside the Russian Embassy at 184-186 Orwell Road on Thursday 6th October at 6pm. Further details to follow. In the meantime, we urge everyone signing this petition to also phone (01 492 2048) and email (russianembassydublin@mid.ru) the Russian embassy to express your disgust in person.

In the meantime, we urge you to also phone (01 492 2048) and email (russianembassydublin@mid.ru) the Russian embassy to express your disgust in person. We also urge you to contact the Iranian embassy in the same regard (01 288 5881 & iranembassy@indigo.ie). Please phone as frequently as you feel necessary. If you are emailing, please cc info@irishsyriasolidaritymovement.org. 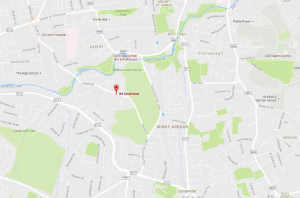