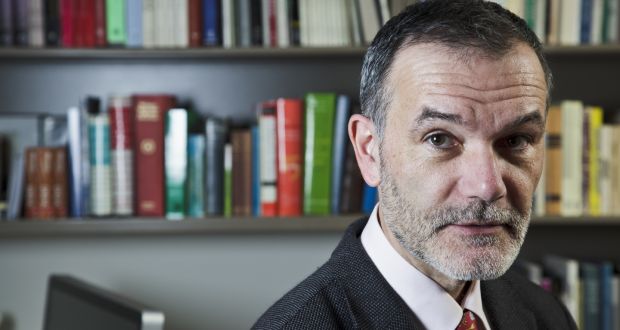 In late 1400 and early 1401, the Mongol conqueror Tamerlane left “pyramids of skulls, like those constructed by Islamic State today” across Syria, recalls the French Middle East expert Jean-Pierre Filiu.

Tamerlane had already destroyed Aleppo. The great Arab historian and statesman Ibn Khaldun talked to him for 35 days, in the hope of savingDamascus. “The whole time, Tamerlane knows he’s going to massacre everyone in the city,” Filiu continues. “He uses the negotiation to divide and rule, to massacre more people, faster.”

Filiu wants Staffan de Mistura, the UN special envoy for Syria, to read Ibn Khaldun, for it’s impossible not to see a parallel with the behaviour of the Syrian dictator Bashar al-Assad.

Filiu is an Arabist, historian and former diplomat who served as an adviser to a French prime minister, defence minister and interior minister. His “added value”, he says, is history. He will address members of the Institute of International and European Affairs in Dublin on The Jihadi Challenge to Europe next Monday, May 23rd, and debate The Spectre of Global Jihad with the author Shiraz Maher that evening at the International Literature Festival Dublin.

In his most recent book, From Deep State to Islamic State; The Arab Counter-Revolution and Its Jihadi Legacy, (published by Hurst in London) Filiu concludes that the Arab revolution of 2011 – a term he prefers to “Arab spring” – is being destroyed by a counter-revolution led by the remnants of dictatorships in collusion with jihadists..

Over the past century, Filiu writes, the Arabs’ right to self-determination was “denied by colonial intervention, ‘hi- jacked’ at independence by military regimes, trampled on by the double standards of the war for Kuwait and the ‘global war on terror,’ and perverted in the UN, where peoples are represented by the regimes who oppress them”.

No other people have faced “so many obstacles, enemies and horrors in the quest for basic rights”, Filiu says.

The French and British treated the Arabs who fought alongside them in the first World War as occupied peoples. Nor did they respect mandates to prepare the Arabs for independence. “In 1926, the French bombarded Damascus while holding an election in Aleppo; in 2016, Assad bombarded Aleppo while holding elections in Damascus,” Filiu says. “The logic is the same: faced with a revolutionary movement, hold meaningless elections.”

The elites who fought for independence were swept aside by Arab militaries. When dictators subsequently claimed laughably high scores in plebiscites, they followed the example of the British, who had King Faisal “elected” by 94 per cent of the population of Iraq.

The dictators would also ape the “paternalistic discourse” of the colonialists, Filiu says, recalling how Hosni Mubarak “pardoned his children” in 2011. “They answered him with a hail of shoes.”

Filiu portrays the Arab dictators as modern-day Mamluks, after the former Ottoman slaves who ruled Egypt and Syria from 1258 until 1516. “They were a military caste, totally foreign to the population,” he explains. “They lived in a closed, endogenous society that inter-married, and the only thing that interested them was their internal power struggles. They were ready to burn down their own countries to keep power.”

The Baathist coups in 1970s Syria, the Algerian army’s war on Islamists in the 1990s, and Assad’s present entrenchment stem from the same attitude, Filiu says. “The logic of the Mamluks, past and present, is Darwinian. The worst man always wins; the one who is ready to kill his brother, strangle his best friend.”

In Algeria, the modern Mamluks triumphed over the people. “Their symbol is [President Abdelaziz] Bouteflika in a wheelchair. When the system runs its course, you put a mummy at its head.”

As the revolutions gained momentum in 2011, the Arab “deep state” or military and intelligence apparatus, helped to foster jihadist movements, including Islamic State, also known as Isis.

The Syrian and Egyptian “deep states” freed Islamist prisoners and secretly armed and funded their movements.

“From the first day of demonstrations in Egypt and Tunisia, jihadists said the people were worse enemies than the dictators,” Filiu says. “They called the popular revolutions ‘the alliance of impiety and prostitution’.”

Former henchmen of Saddam Hussein and Muammar Gadafy have made common cause with Islamic State. The former Yemeni dictator Ali Abdullah Saleh supported the Houthi rebellion. “It’s the Frankenstein syndrome,” Filiu explains. “The monster escapes the control of the doctor who creates him.”

Under Field Marshal Abdel Fattah al-Sisi, who overthrew the elected president Mohamed Morsi, violence has reached proportions not seen in Egypt since Napoleon’s invasion, Filiu says. Syria has not seen such violence since Tamerlane. Counter-revolution is the cause of the violence.

Yet there is a persistent temptation to support the modern Mamluks, with the argument that they are better than the (Algerian) GIA or Islamic State.

“The GIA didn’t exist in 1991 [when Algeria cancelled free elections],” Filiu points out. “Isis didn’t exist in 2011. People reverse the chronology, as if the consequence were the cause.”

To support dictators against Islamic State “is not only immoral, it cannot work”, Filiu says. He wants the West to abandon faith in Arab “armies of occupation” and help Arab peoples.

Filiu strongly objects to President Barack Obama’s two basic tenets on Syria: that the people Obama has referred to as “former doctors, farmers, pharmacists and so forth” were incapable of overthrowing the Assad regime; and Obama’s refusal to intervene without knowing who would replace Assad.

Sovereignty can come only from the people, Filiu argues: “Who liberated America from the British? It was doctors, farmers and pharmacists. A revolution is made by the people who exist.”

Burned by the Libyan experience, Obama demanded the impossible in Syria. “Imagine if in [the French revolution in] 1789, people had asked who would replace the king. Revolutions don’t work like that,” he says.

Filiu wrote a book on his stay in revolutionary Aleppo in 2013, when the population drove jihadists out. The world then allowed regime forces to decimate the “doctors, farmers and pharmacists” who had risen up.

“There were a million people in the revolutionary zone,” Filiu recounts. “Then Assad started the TNT barrel bombs. There are fewer than 300,000 left now. Assad and Putin cannot take Aleppo house by house, so they decided to starve them and kill all the doctors in the hope people will die of their wounds. They want to turn Aleppo into Grozny [the capital of Chechnya, where 200,000 people were killed by Russian forces.]”

Despite our fixation on dictators versus jihadists, Filiu reminds us, the people count. In March, local militias along the Libyan-Tunisian border drove Islamic State out of their area. When the Syrian resistance briefly took the town of Rai from Islamic State in April, they received no help from the West.

The floundering Arab revolutions are as important to the future of Europe as was the fall of the Berlin Wall, Filiu argues. “We are reaping terrorism, refugees and political populism as a direct consequence.”

Filiu believes Europe should make the Middle East its top priority, and commit huge financial and diplomatic resources. “When the Berlin Wall fell, no one said, ‘That’s the east Europeans’ problem’. We have to stop obsessing about Islam and the ‘caliphate’ and talk about Arabs and the right of Arab peoples to self-determination.” Jean-Pierre Filiu’s debate with Shiraz Maher takes place on Monday May 23rd in Smock Alley Theatre. Tickets are available for €12 at ilfdublin.com

Above is the original article published by The Irish Times available at: http://www.irishtimes.com/news/world/europe/arab-civilians-suffer-long-struggle-for-self-determination-1.2652478#.Vz2MvNX2PxY.twitter